It's a case of "famous last words".
A couple of posts ago I said that I' d finished the strip for Insomnia's anthology and I'd found a new horror mag to submit some stuff.
I thought I'd be a bit clever(HA, fat chance) re-tweak an old strip that I'd done a while a go and submit it.
It's not gonna take too long I said; 2 weeks at most.
HA I say! HA and HA and Ha.
Wrong. it's been 4 weeks and it's not finished, nearly but not quite.

These 3 panels are from the 1st page (can't show too much, it'll give the plot away)
A story of how your indiscretions can come back to bite yous in the ass.
Anyway, me being a bit late has put other stuff on hold, and let me tell you there is loads of other stuff coming, it's just there aren't enough hours in the day what with this drawing lark and a full time job. 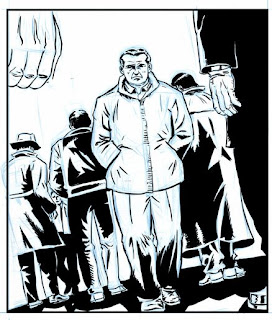 Hopefully I'll finish it this week.
After that, I've got another strip to start straight away (more on that later) and a 2 pager by a cracking new writer name of John Halfpenny.
I've read a couple of his little tales and I gotta say this man is gonna go far.
Plus something big that I can't mention just yet,
plus all of my other stuff that is already on hold.
Bugger! Oh well it's a good job that I love to draw isn't it!
Posted by Gary Crutchley at 10:23 2 comments:

Labels: Not enuff hours, too man tales to tell 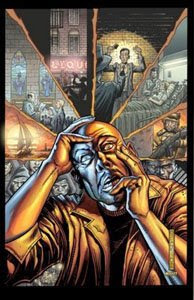 The deadline for the 10 page strip I did with Steven stone for Insomnia publications Layer Zero anthology is next Tuesday, no worries I finished a couple of weeks ago. So it'll be off to the printers and ready to go on sale at Bristol con. Above is the cover without the title and all the lettering gubbins that you find on covers.
Here is the list of what you have to look forward to.

Cover
Stories
Pin ups
It looks to be a good solid book.

They are selling the book and the others that are coming out at special prices at Bristol.
So a good read at bargain prices.
If you're going to be at the Bristol International Comic Expo and the Small Press Expo 2009, you'll be able to pick Cancertown up (along with its Insomnia brethren, Layer Zero 3 and Cages) at a special convention price as shown below

Cancertown is the biggee, Written by Cy Dethan, Pencils/Inks by Stephen Downey, Colors by Melanie Cook, Letters by Nic Wilkinson, Cover by Paul Cartwright. Features a foreword by Bryan Talbot...yup THAT Bryan Talbot.
Personally I can't wait, from what I've seen of it on www.mybook.com it looks great.
Ok that's it, hard sell over.
Posted by Gary Crutchley at 05:30 4 comments: 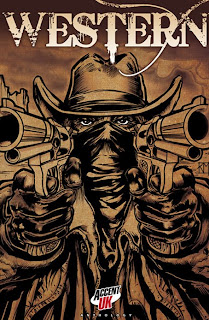 Above is the cover to AccentUK latest anthology and it was delivered yesterday, and it's a corker.
Sporting an excellent Kirk Manley wraparound cover with 192 pages, 31 stories and 12 pin-ups all fer a measly £7.99, it's a bargain and no mistake.
I gotta say the editors Dave West and Colin Mathieson have done a bang up job and designed by the very talented Andy Bloor , it's even better than Zombies and Robots.
These three have certainly raised the bar on production values for the small press.
And the stories:- by the likes of Leah Moore and John Reppion, Dave Hitchcock, Steve Bissette, Paul Harrison Davies, Indio , Andrew Cheverton, Tim Keable, Kieron Gillespie, just to name afew are t'riffic.
There is something for everyone.
You can buy it directly from AccentUk's site at the moment, with plans to sell it through Previews.
Oh did I tell you I'm in this. 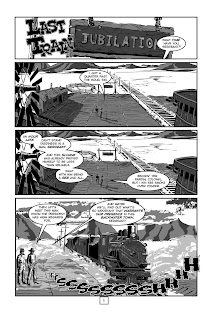 This is the first page of my own 8 page strip.
Posted by Gary Crutchley at 08:50 6 comments: 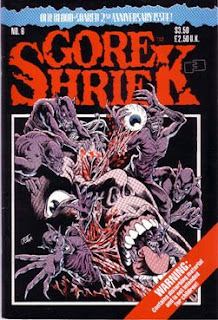 Drawing comics is a funny old business, ask anyone who is involved in it, and editors are a breed to themselves.
The above cover is the cover to Gore Shriek no 6 published by a now defunct publisher Fantico in 1989 and this was the comic that published my first professional work.
Now, I'd write and draw loads of stories, never dreaming that someone would want to publish them, and I'd usually stick with the fantasy genre, Conan and Cerebus being 2 of my favourite comics at the time.
It wasn't till I met a bunch of like minded geeks here in sunny Stoke-on Trent that I had inkling that I should send some stuff to publishers. Me mate Shane Oakley was the most vocal, especially about dumping the fantasy side and getting me teeth into horror.
So I set about doing horror stories with relish, the stories did seem easier to write, and Detour was one of the stories that were done in that 1st month.
Also around this time, I first came into contact a very talented artist name of Ben Dilworth.
Ben was very much into the small press scene and very prolific, churning out stories like no ones business.
Anyway we got together and he agreed to ink this little tale, the first of many that we collaborated on.
And was I glad, he seemed to fix all my bad drawing, with all my wrong anatomy and ugly faces and me bacon slice ears. when I got the art back it was a revelation. This man could draw!
He inspired me to actually get some anatomy books and start drawing proper.
So I sent this strip out to about a dozen small publishers and waited with bated breath there answers.
There is nothing worse than spending loads of time on a strip and then it getting slated by editors, or worse, where they can't even be bothered to answer.
Anyway, (and this is where it links with the comment earlier about editors) replies start coming in; the first one "we like the art, but the story is weak", the 2nd one "we are impressed with the story but the art doesn't do it for us" but the 3rd one... the 3rd one "we like it, we want it!! And, we'll pay you for it" and that was that, gawd bless you Steve Bissette. (met him later at a Bristol Convention and we had a great talk about failing marriages while he was sketching a werewolf).
And so I decided to post it here, it's been 20 years (I feel old) and I'm still proud of it, oh I know it ain't perfect but it gave me the kahonies to do more and send stuff away.
So I let you read it now in peace, but first thanks to Shane for suggesting I write horror stories, a big thanks to Ben for inking it and making my art look half way decent and an enormous shoutout to Steve for buying the bloody thing.
Enjoy. (and apologies for rabbiting on.) 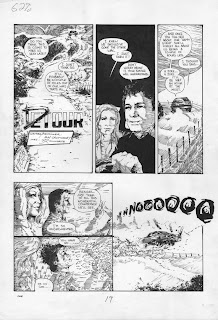 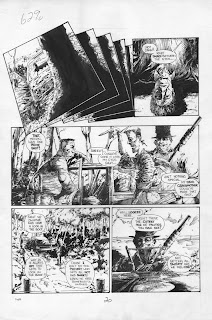 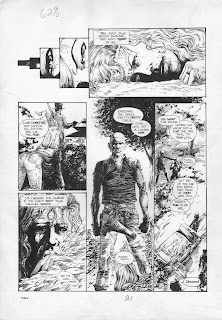 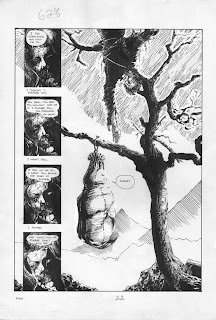 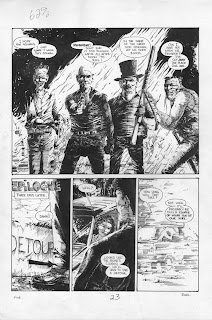 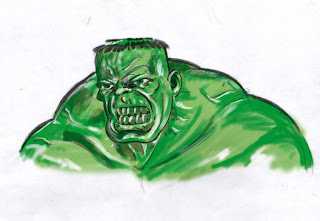 A bit of spare time on me hands, not much, just enough time to do some boring stuff on the net, pay bills, check bank balance that sort of thing when I decided to have looksee at me old mate Matt Brooker's web site (there is a link and I thoroughly recommend you spend some time there, he's a crackin' artist and all round good egg).
Now he's been doing this digital drawing malarky for a while and what he doesn't now about it, well it's probably a lot.. but still he knows quite a bit, including the odd tutorial on c0louring in photoshop.
Now I haven't take the leap into digital colouring, hell I'm only getting used to using tone in me strips, but I thought I'd have a quick go.
Got a sketch of the Hulk that I did a few days ado, bish, bash bosh and here you go.
Probably over worked it but still not bad, (not that you can mess the Hulk up too bad, what, with him being all green and all.
I have another go later, something less green and see how that turns out.
Posted by Gary Crutchley at 05:48 2 comments: 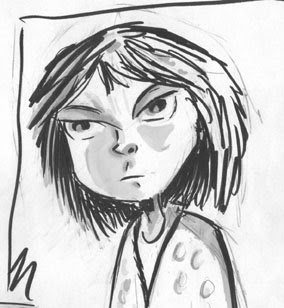 Hurrah, finished the strip for insomnia at last, it took a little longer than I planned, but I learned a new technique (thanks Matt) so it wasn't too bad.
I can't rest on me hands though, cause it's straight onto something else.
This one's an old one, redoing it to send to a horror mag I discovered that is (a rarity) looking for submissions.
It shouldn't take too long though as most of the work has been done, (famous last words). 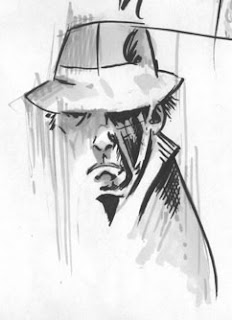 However still doing some sneaky sketches, and still using these great Promarker pens from Letraset. Just wish I had the kahonies to do a full comic with these on real paper and not have to ink digitally. Oh well, one day perhaps, when me inking skills are a lot better than they are now. 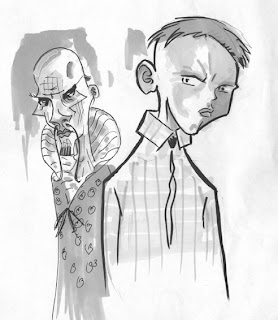 It's just that the delete button makes things so much easier and neater.
Posted by Gary Crutchley at 09:00 No comments:

Labels: done and dusted. marker pens. the next strip, Insomnia 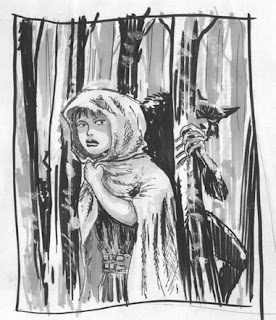 I'm still beavering away on the 10 page strip for Insomnia publications. Their deadline is the end of the month. so hopefully I'll meet that. All the primary inking is done, the lettering is done, just "toning it all up" now.
But I haven't forgot you lot with a odd sketch, (once again, done at work when no one was looking). it's not much, there'll be more later.
enjoy
Posted by Gary Crutchley at 08:22 2 comments: