A Blast from the past 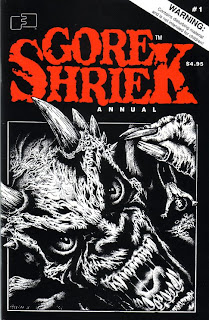 Still working on Sam Costello's strip for SPLIT LIP. Finally on the inking, so I'll be posting sketches and stuff next week probably.
But I thought I show another old strip done 20 odd years ago, again printed in Gore Shriek.
I'd sold a couple of stories to them (one was posted a while ago on this very blog) and was keen to sell more.
Around this time there was a group of us doing this for fun and profit. Friends, Mark Buckingham and Matt Brooker had just begun their professional careers, Andrew Yoxell was still doing amazing things with the small press.
We were travelling to London to go to the Society Of Strip Illustrators where we'd meet Neil Gaiman. David Lloyd, Garry Leach and loads of other talented artists and writers.
So it were great days indeed.
There were a couple of friends who weren't actively involved in doing comics, but still read them, and were very interested in the whys and wherefores of doing comics.
One such person was me old mate Dave Henney.
Lovely man, cracking mate, a bit prone to the odd volatile rant (but who isn't) but would do anything for you.
The times that man has been there for me, well... too many to count.
Anyway Dave being Dave saw that we were all writing and drawing these funny books and thought to himself that it looks a bit easy. So he bet Andrew Elliott (another corker of a mate and terrific writer) that he'd have a go at this writing lark.
And write he did, a fair few gems including this one.
I read it, thought I'd have ago drawing it and here we are.
Den Dilworth inked it and I sent it of to Tom Skulan and Steve Bissette (editors of Gore Shriek. It's all about the contacts and who you know in this biz.) I'd already sold a couple of tales and I thought they'd go for this one.
And I weren't wrong.
They bought this one and another tale of mine (a story for another time)
and Dave was over the moon. He won the bet (he usually does) and it was printed not in a regular issue of Gore Shriek but in the annual no less.
Result!
The only problem was that page 2 and 3 were printed the wrong way round.
So 20 years later shown for the first time how it was meant to be read...
I present Home Security by Dave, Ben and Me. I hope you enjoy it. 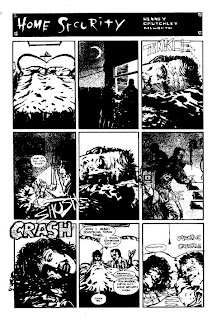 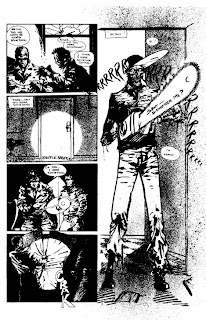 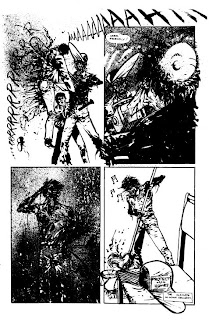 Not to shabby.
We were vastly proud of this (ahh the naivety of youth).
Dave doesn't write any more, but I was glad I was there when he dipped his toe.
Posted by Gary Crutchley at 05:01 3 comments:

pullin' me finger out 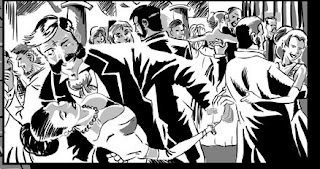 It's been so long I've posted that weeds are sprouting around here.
Anyway what's happening you ask?
Not too much I reply. Oh don't get me wrong there's plenty to do but it's a case of when art goes bad.
"The Master Cracksman" is done, as you can see from the inked panel. I'm pretty happy with and more importantly John's pleased with it, which is a big relief.
So I should be hard at Sam Costello's Split lip story, and I am, but it's all going slow.
There have been days when nothing is going right, the times I've screwed up a full page of art and started again.
Bloody frustrating.
But I'm optimistic , I'm getting close to finishing the pencils and next week I'm hoping to start inking.
I was going to ink it Manga Studio, a corkin' piece of software created especially to draw comics on a computer, but I'm not up to speed with it, so I'll stick with illustrator for this one.
Speaking of Sam, he's just been interviewed about Split Lip here;
groovyageofhorror.blogspot.com
And a good un it is to.
I start posting some sketches for Sam's script soon and there'll be a a bit of news soon.
Posted by Gary Crutchley at 09:45 2 comments: