Tomorrow (august 27th) is the British International Comic show or Bics and I aim to go.
Lookin' forward to going in fact. Seeing old friends, hopefully making new ones and just generally being in geek mode fer the day.
Also AccentUK latest anthology PREDATORS is gonna be released and they 've kindly included one of me little tales.
It's called the Lure and it's a very old tale.
It's something that I wrote and drew 20 odd years ago for my two boys when they were in nursery school...so a long, long time ago then.
By the time I finished it, there were a few personal issues with me and their mum and I never did give them the strip so they could take it to school.
In the late eighties I sold it to Peter Hogan when he was editor at Revolver for the best bit of money I've earned, doing these comic tales, but unfortunately Revolver folded before they could print it.
Then it was printed in the horror anthology KILLING STROKE published by Malibu Graphics Inc in the early nineties.
Then I forgot about it for a while until I started to ink digitally.
I was looking to practice using Adobe Illustrator and the Lure was a tale I picked to re-do.
And it worked out pretty good.
Dave West and Colin Mathieson (Accent UK) were looking for tales to fill their latest anthology so I sent them the Lure and they said yup, we'll have it.
I still like the story, but if I had more time I think I'd have a go inking it in Manga Studio, now that I use that piece of software and not Illustrator.
Oh well.
So, if'n you're popping along to Bics tomorrow, visit the AccentUK stall and buy a copy of Predators, if I'm hovering about I'll even sign my tale fer ya.

Posted by Gary Crutchley at 03:07 No comments:

Labels: never 'appy with me inking 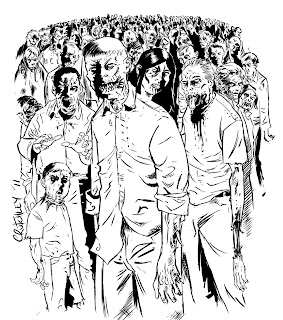 All inked and such, fer AccentUK's 2OMBIES coming out later this year. 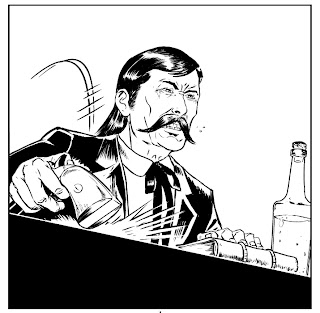 Seriously you don't wanna piss him off.

Labels: A tale of a Well Hung Man 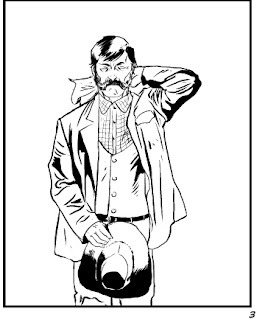 Work on "A Well Hung Man" coming from Lazy Bones Studios jest as quick as a can finish it.
Posted by Gary Crutchley at 09:36 2 comments: