Accent UK Books (including WESTERNoir) back in store at GeekBox comics
in Newcastle-U-Lyme.
That is all.
https://www.facebook.com/geekboxcomics?fref=ts
Posted by Gary Crutchley at 07:08 No comments:

http://www.theatlantic.com/video/index/383057/the-best-71-second-animation-youll-watch-today/
Posted by Gary Crutchley at 07:49 No comments:

From Colin Mathieson and Dave West.
Go an' have a looksee, ya'll be right glad ya did.
http://momentofadventure.blogspot.co.uk/

http://strangestoftimes.blogspot.co.uk/
Posted by Gary Crutchley at 09:03 No comments:

Done and dusted for another year.
It was promised to be bigger and better than ever…
And you know what?

This is the third year I’ve attended and I gotta say, this was the best yet… 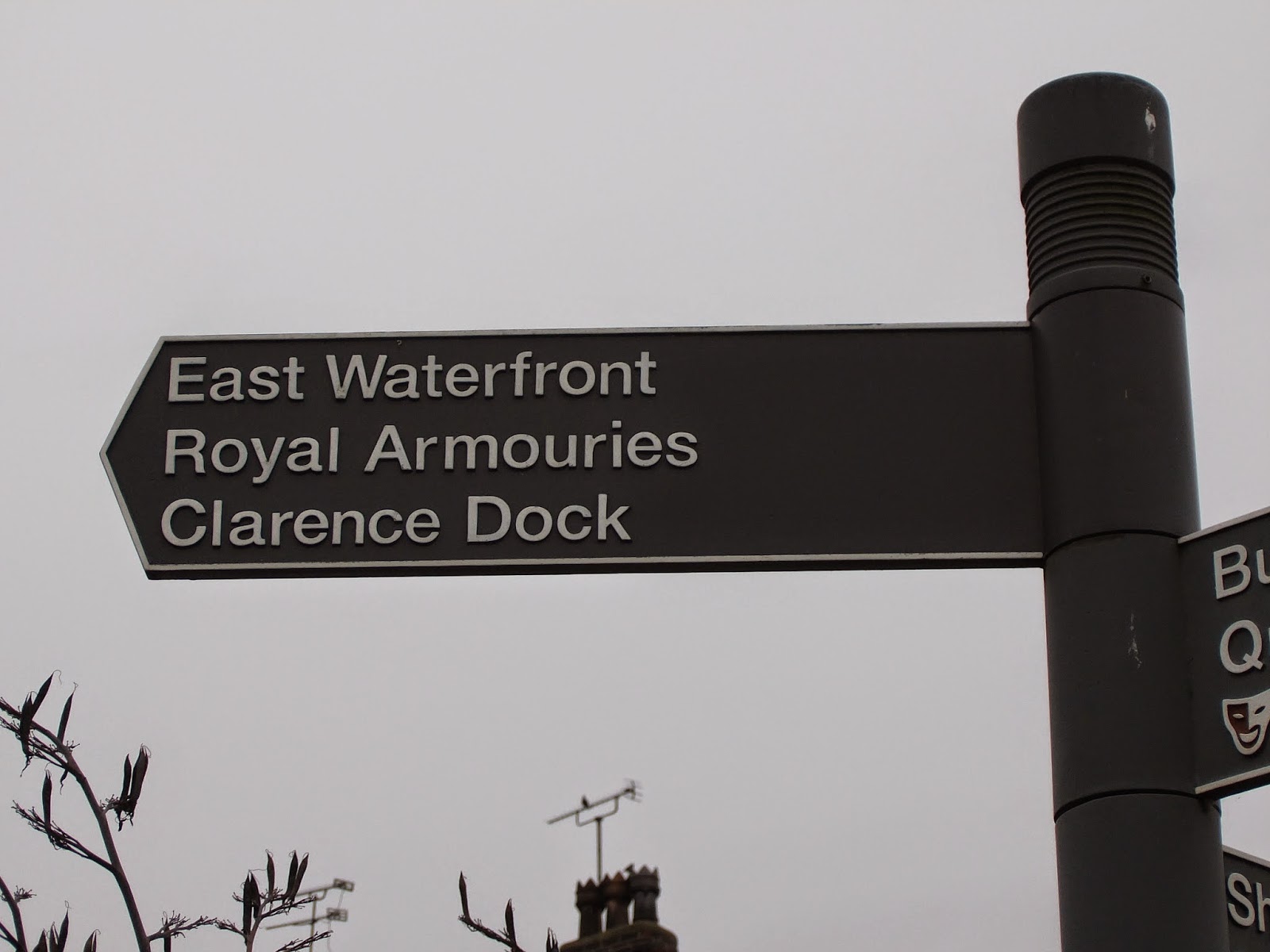 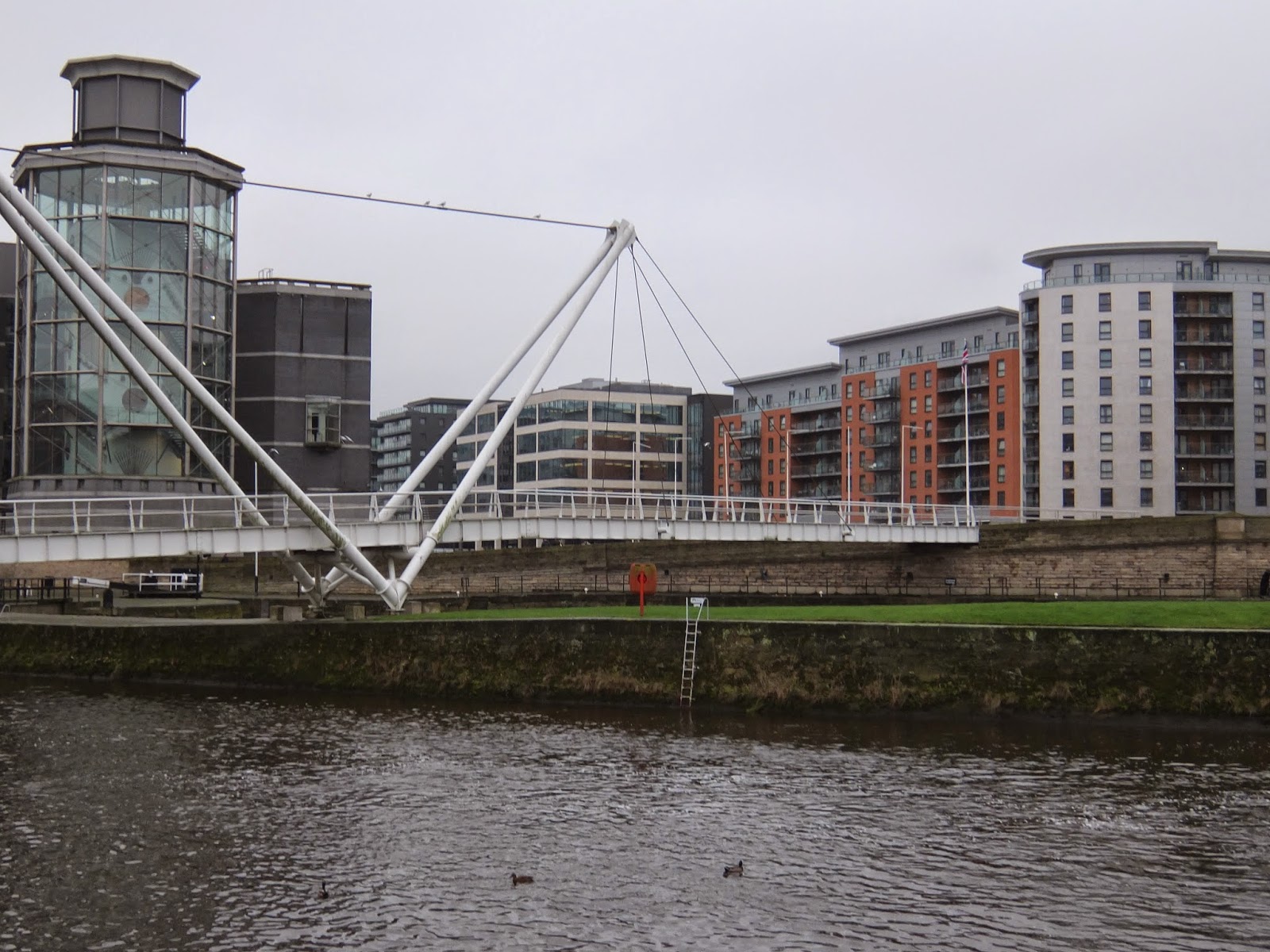 Quick 15 minute walk from the station to the Royal Armouries (where the event has been held for a few years now), a couple of minutes queue for my “Weekend Pass” wrist band and I’m all set to go. 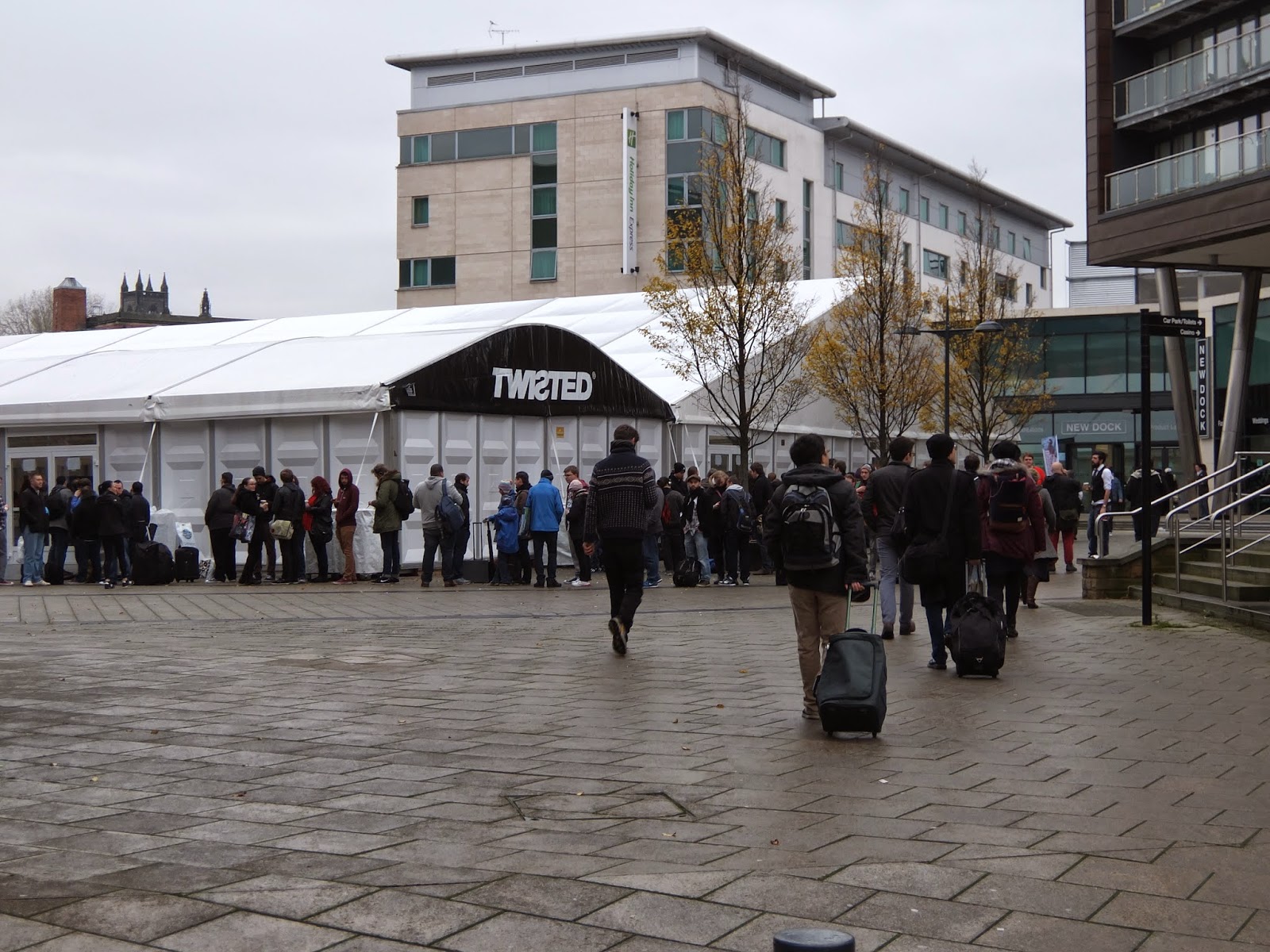 They had erected a marque this year…The Thought Bubble Tee Pee, slap bang in the middle of the New Docks Hall and the Royal Armouries Hall. And I gotta say that worked a treat.
Folk flitting from one hall to another via the “Tee Pee”…

None of this wandering off track looking for the third hall.

The bulk of the overseas professional guests were housed in the Tee Pee so there were no queues in the other halls blocking tables.

I quickly located “Accent UK” table in the New Dock Hall…Dave West, Colin Mathieson and Colin’s son Scott, standing behind their table, set up and ready for whatever the weekend would bring. 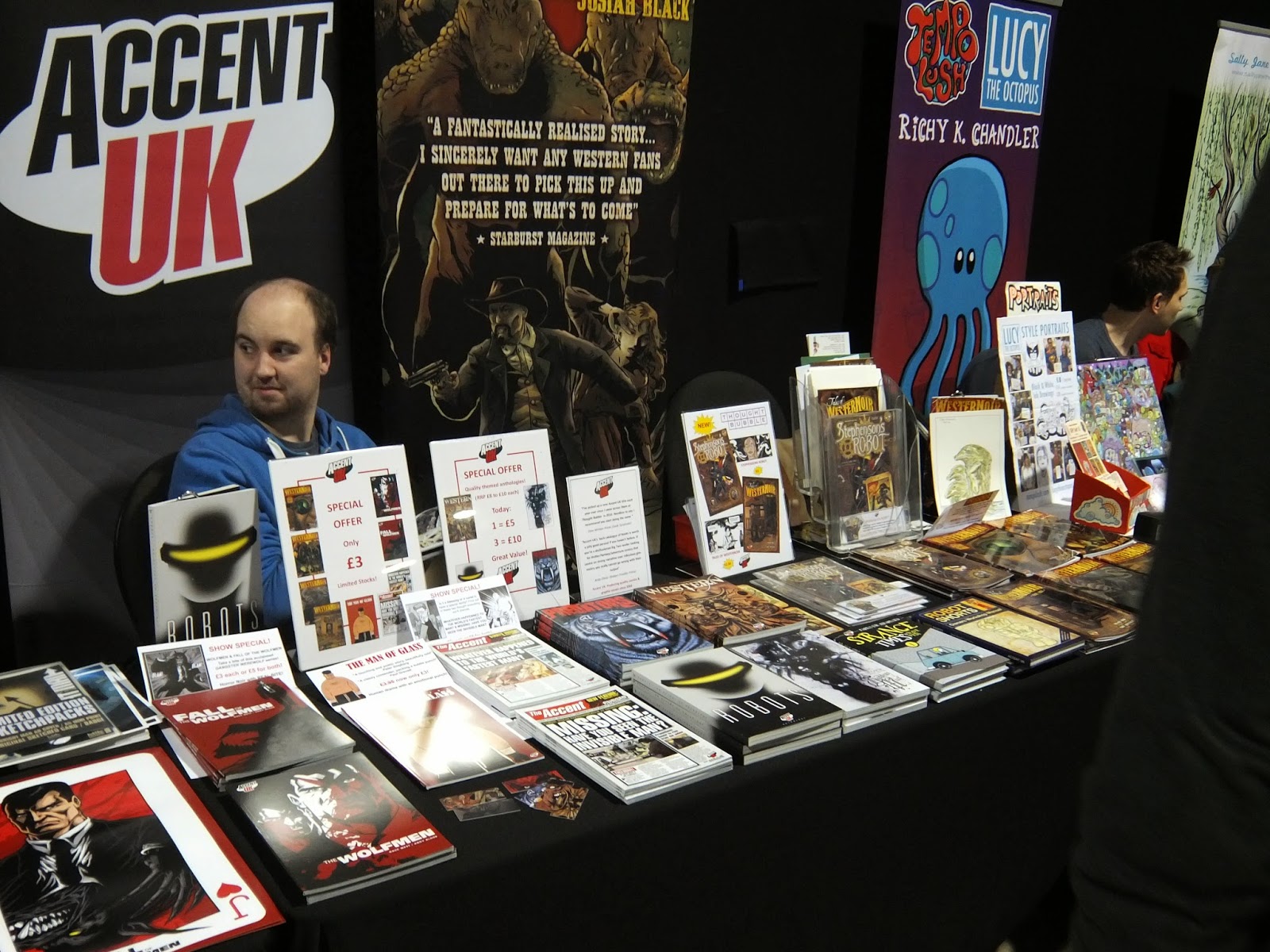 Next table to them was Andy Bloor and Mo Ali promoting and selling their brand new Book.
Now Andy does all the design work on Accent UK’s books and Mo had written a fair few tales for their anthologies so it was like a big ol’ Accent UK get together. 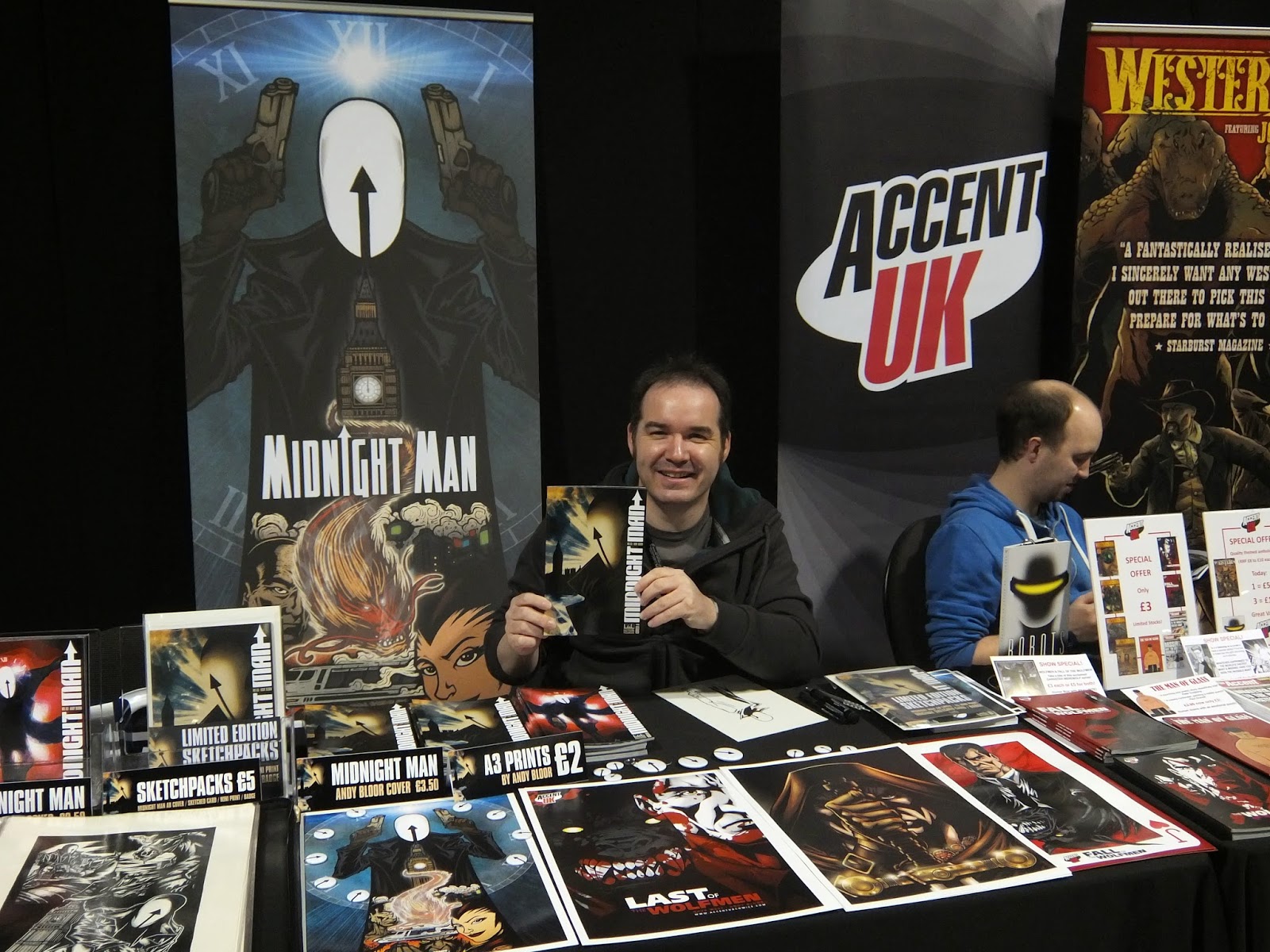 I handed over a dozen new watercolour sketches that I’d finished especially for Thought Bubble,  took off my jacket, rolled up my sleeves and stood ready to sell as many books I could.
Bring it on.

Written with gusto by Dave West and Jon Ayre and drawn with dazzlin’ dexterity by Indio. A genius when it comes to drawing the bizarre and downright freaky critters.   And that’s not all as it also contained a short back up strip illustrated by the very talented Marlene Lowe
What an unbeatable combination. 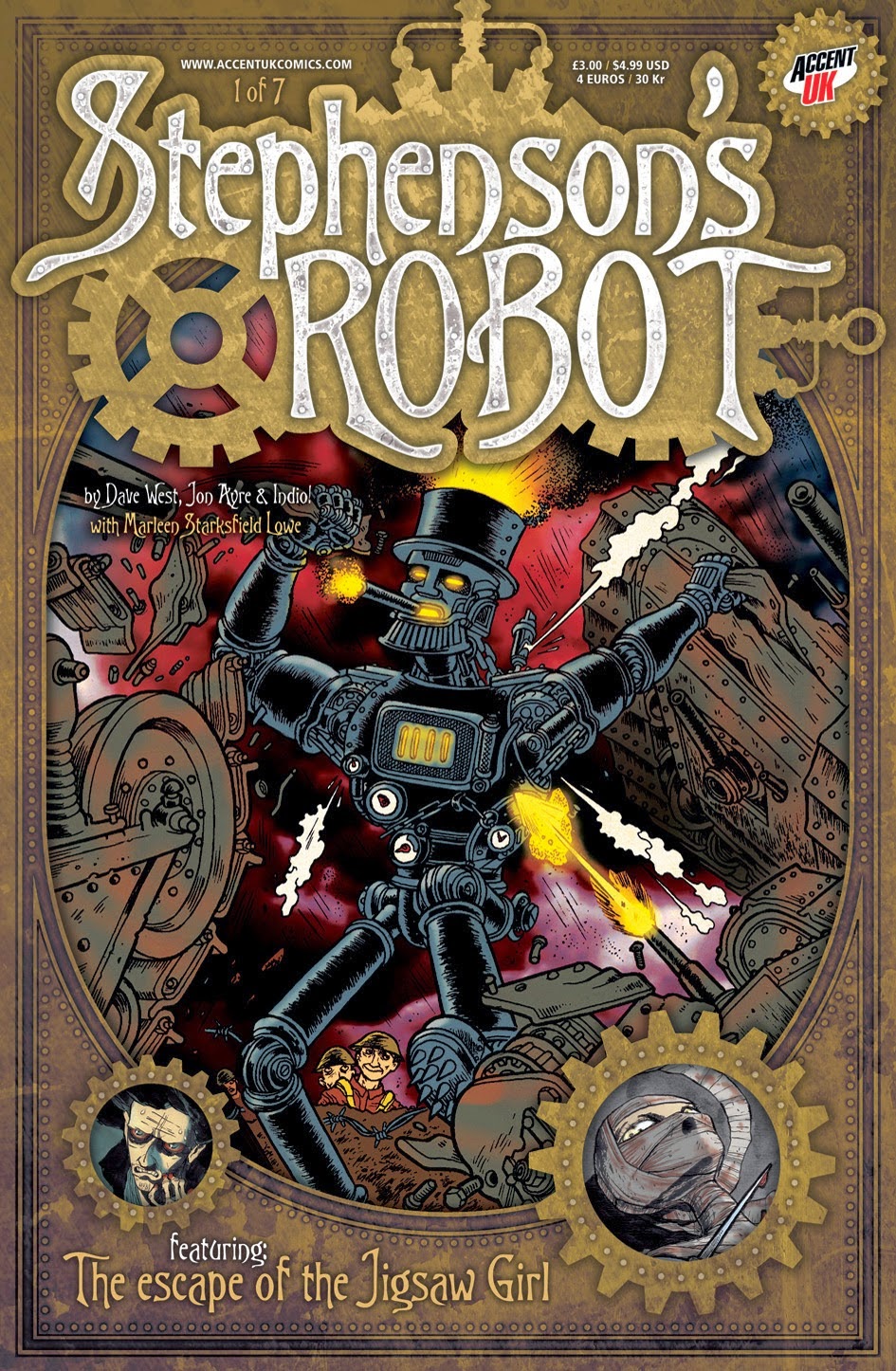 The second book is the one I’m heavily involved in (stands to reason I’m gonna be gonna be a little bit biased, ain’t I?)

“Tales of WESTERNoir”: - Short stories that tell the back stories of folk Dave and I have created in the pages of the critically acclaimed on-going series: -WESTERNoir.

The fantastic first issue contains two tales featuring the artistic talents of Rowland Bird (who illustrates a tale of mine: -Loose ends) and Pedro Lopez (illustrating Dave’s tale: -The Kiss of death). All topped off with a little background information on how WESTERNoir came to be. 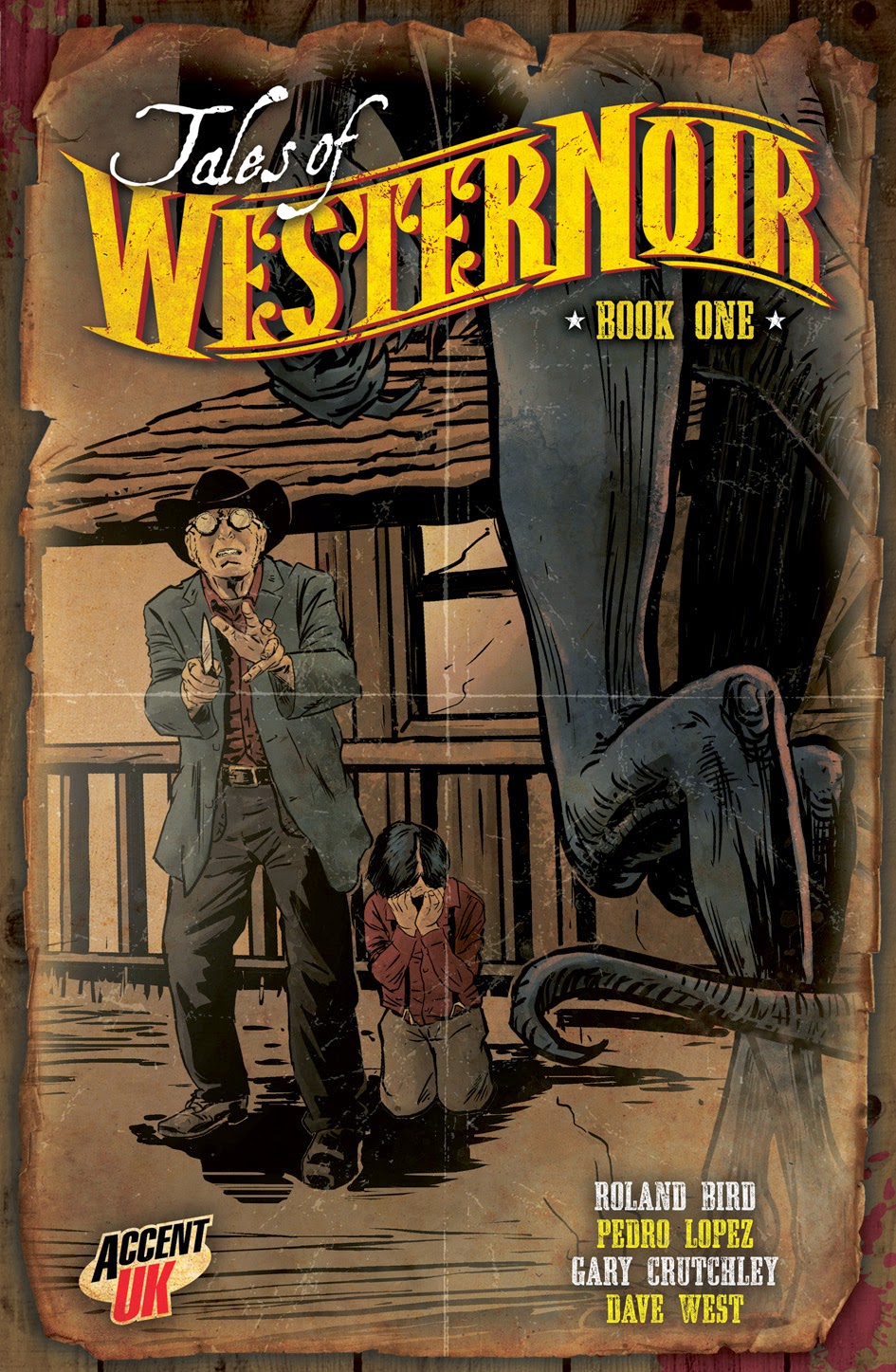 I can see the discerning readers amongst you already tempted by both of these books.

So, as is the norm at these events…the first hour sales are slow. Folk tend to wander about, see what’s what, before they part with any cash. Hell, I’m like that meself…nothing worse than seeing something late in the day and no money left to spend.
But, it didn’t take long before sales started to pick up…
…And then some. 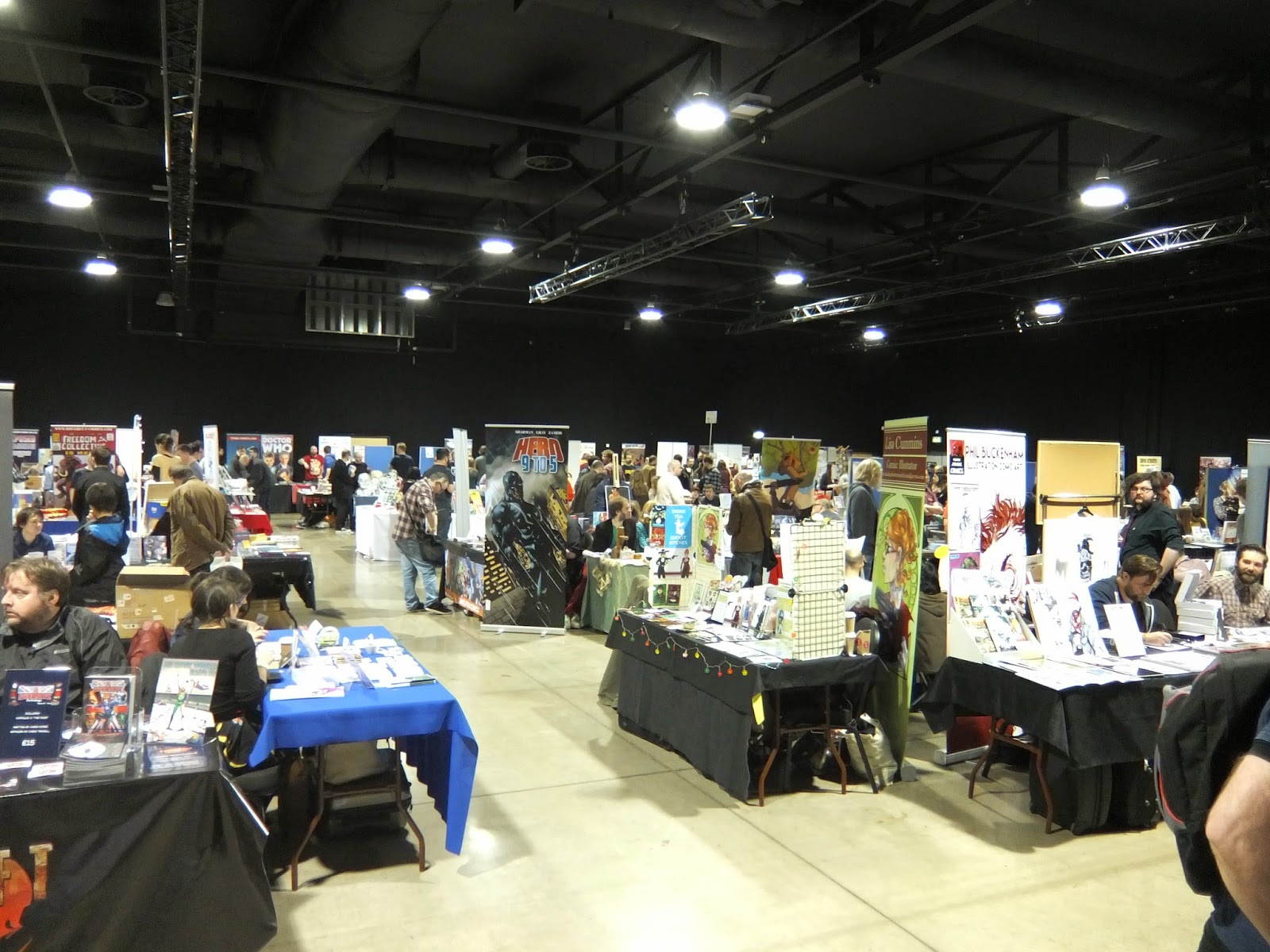 Colin and Scott ambled off, to see what’s about and possibly grab a bite to eat, leaving Dave and I to man the table.
I thought we could discuss plots and ideas for WESTERNoir, but we just didn’t have the time. Folk had decided to spend their money and lucky for us, they wanted Accent UK books…

And we saw loads…Many eager to pick up WESTERNoir book 4…desperate to see what’s happening to Josiah Black.

I swear it didn’t seem that long but it was two hours later when Colin and Scott returned to relieve us…
No wonder I was feeling hungry.

So food it was then, in a great little Bistro just around the corner to the event.
Then it was out and about to have a good looksee as to who was in attendance.

The only “guest” I planned to see was Brian Hurtt: artist on The Sixth Gun, the Damned and Queen and Country.
Same with Dave…he bought his hard back copy of the Sixth Gun and I’d bought my “Gunslinger Edition” 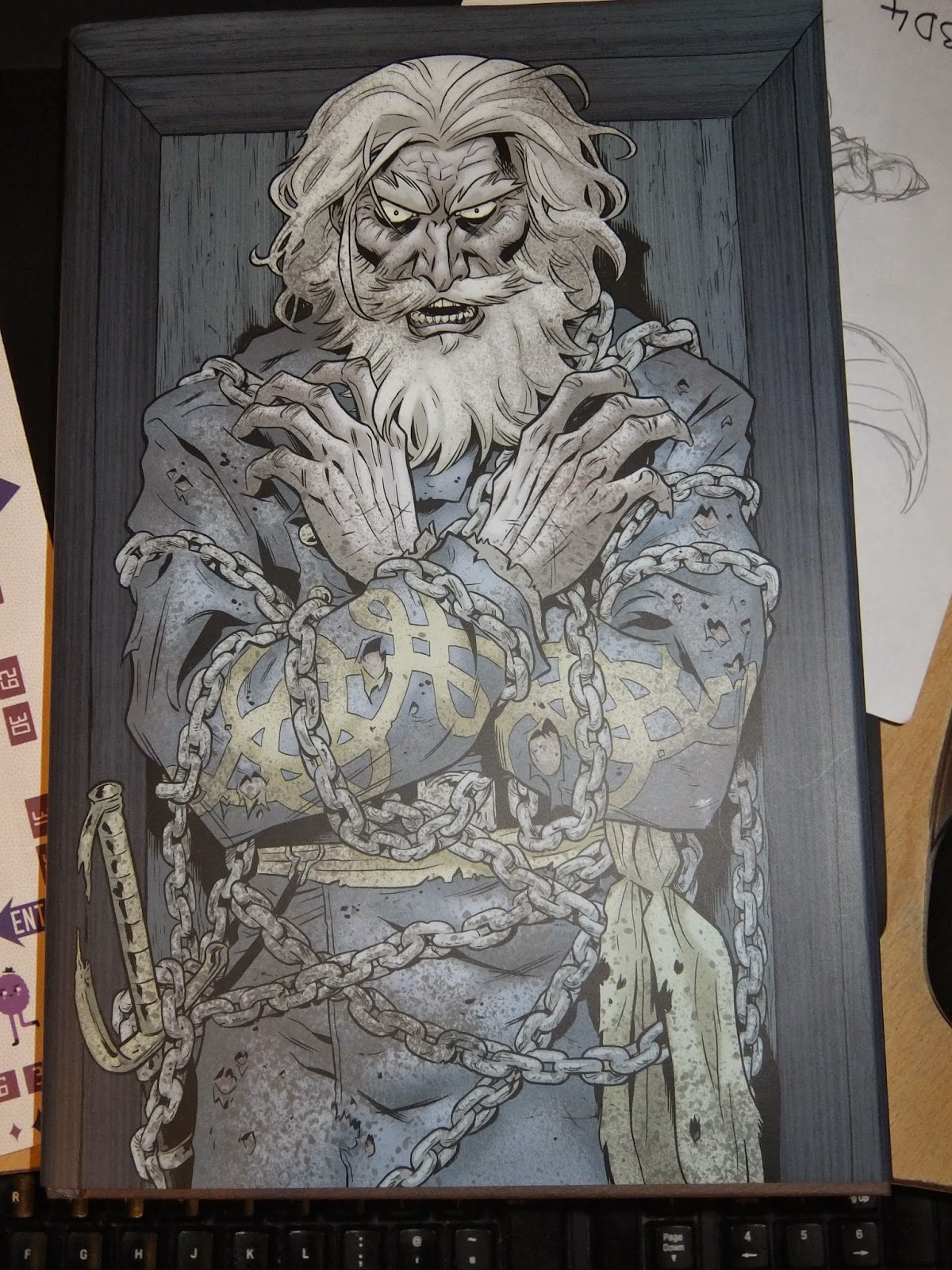 and wanted Brian to sign it…Not only did he sign it but he drew wonderful sketches of the main characters for both me and Dave.
Made my entire weekend. 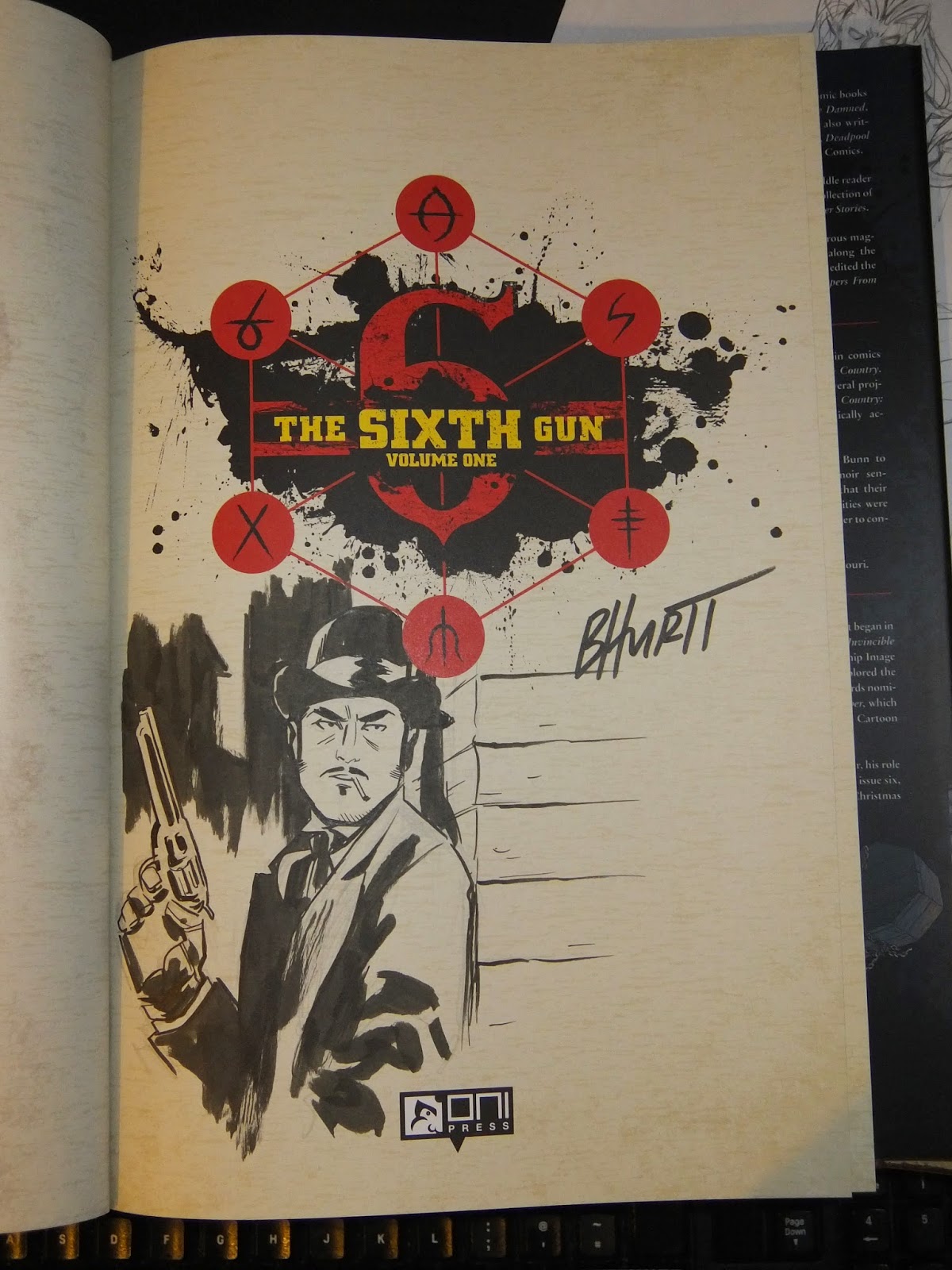 Because it took longer than anticipated, we decided to head back to the table, but not before I said a brief hello to my old mate Mark Buckingham. I’ve known “Bucky” for many, many years and the only time I get to see him is at these events.

It was grand to see him busily doing sketches for a heap a folk.

He’s an extremely popular artist:  with “Fables”, the “Fairest” and writer/artist on “Dead Boy Detective”.

Back at the Accent UK table Colin and Scott had been kept busy which reflected in sales. By the end of the day we’d sold more books in the one day than both days at last year’s event.
Crackin’ news indeed.

In fact, it wasn’t just us with record sales, everyone attending was doing extremely well.
It seemed folk were in the mood fer comics.

There were plans afoot to meet up for an evening meal with a few friends. There is an official Thought Bubble function in the evening but we all fancied a quieter time.

I had to book into my hotel first…I hadn’t been able to book a room in the Hotel  that’s right on the doorstep, as it were, I missed their  last room by ten minutes but it didn’t matter as I managed to get a room not five minutes away. Just across the road from the “Palace” pub in fact…the place where we planned to eat. 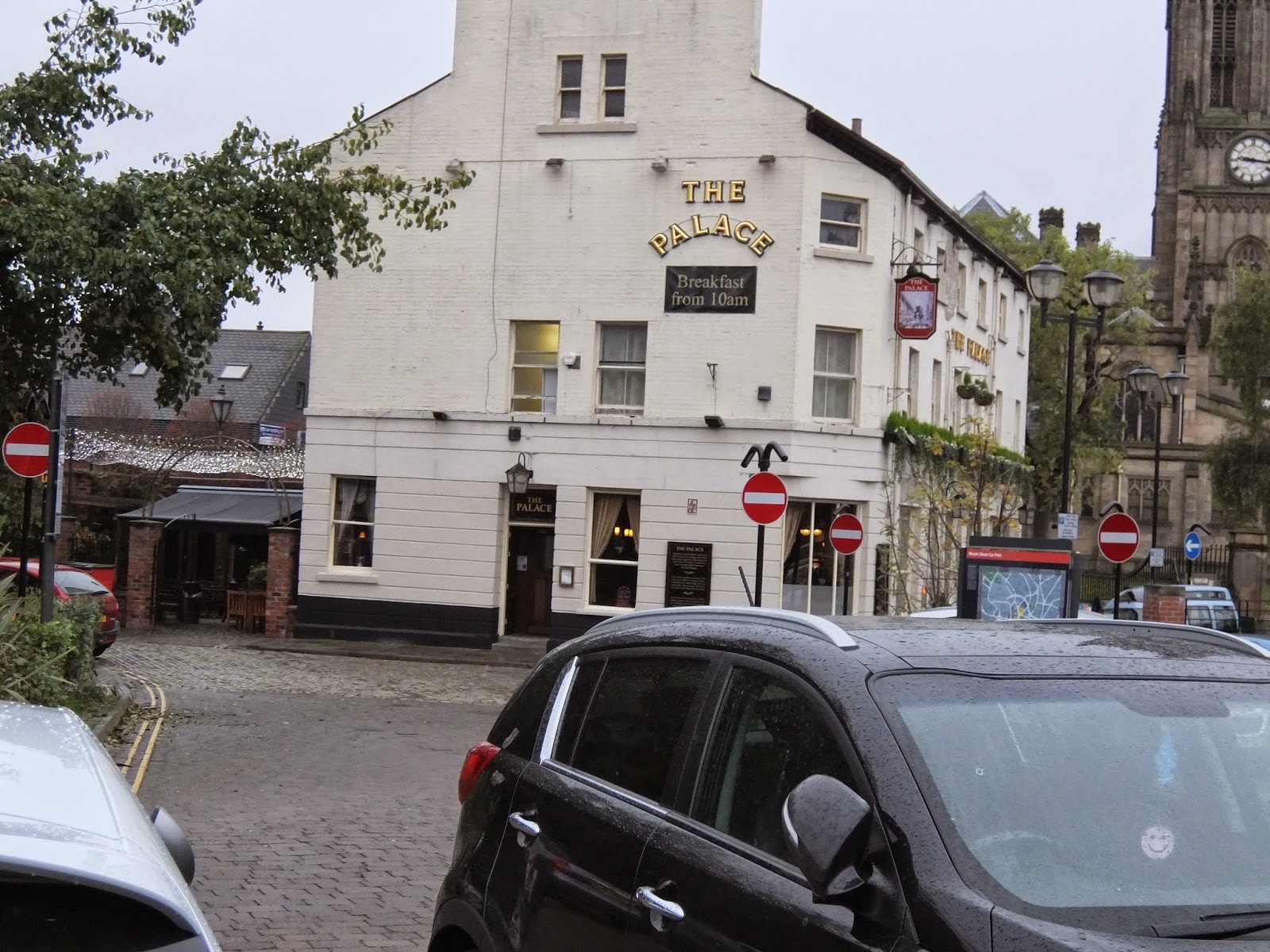 So a very good night was had, good food, great company and talk all things geekery…what more could a person ask for.

Sunday is usually much quieter …and it was…good constant sales mind, just not as hectic as the Saturday…
After a modest breakfast and a leisurely stroll from the hotel, I met up with Dave, Colin and Scott outside chatting to a friend of theirs (about next year’s conventions as it happens).

But it wasn’t too long before we were back behind the table, chatting to potential customers.

It’s grand to get people’s reaction to the books you help create.
When someone comes to you and shouts “NO!!! you can’t leave it like that!!!” after reading Book 4 of WESTERNoir then you know you’ve made a connection and they “get” what Dave and I are doing.

Sunday being quieter meant that I could wander about the halls more and talk to friends.
Friends that I only get to see face to face at events like this one.

And then…All too quickly it’s over.

It’s time to pack up and head home.

The four of us decided to have something to eat at the local Pizza Express before we made our way home, and I was delighted that Matt Brooker could join us. I’ve known Matt (AKA D’Israeli) as long as I have “Bucky”. We were all part of a group in the early eighties that hung around together drawing, writing and creating Fanzines just before  Mark and Matt’s professional careers took off…

Matt is well-known for Scarlet Traces, War of the Worlds, Stickleback and loads more. More recently his book Ordinary (written by Rob Williams) has been collected. And a cracker of a tale it is too. 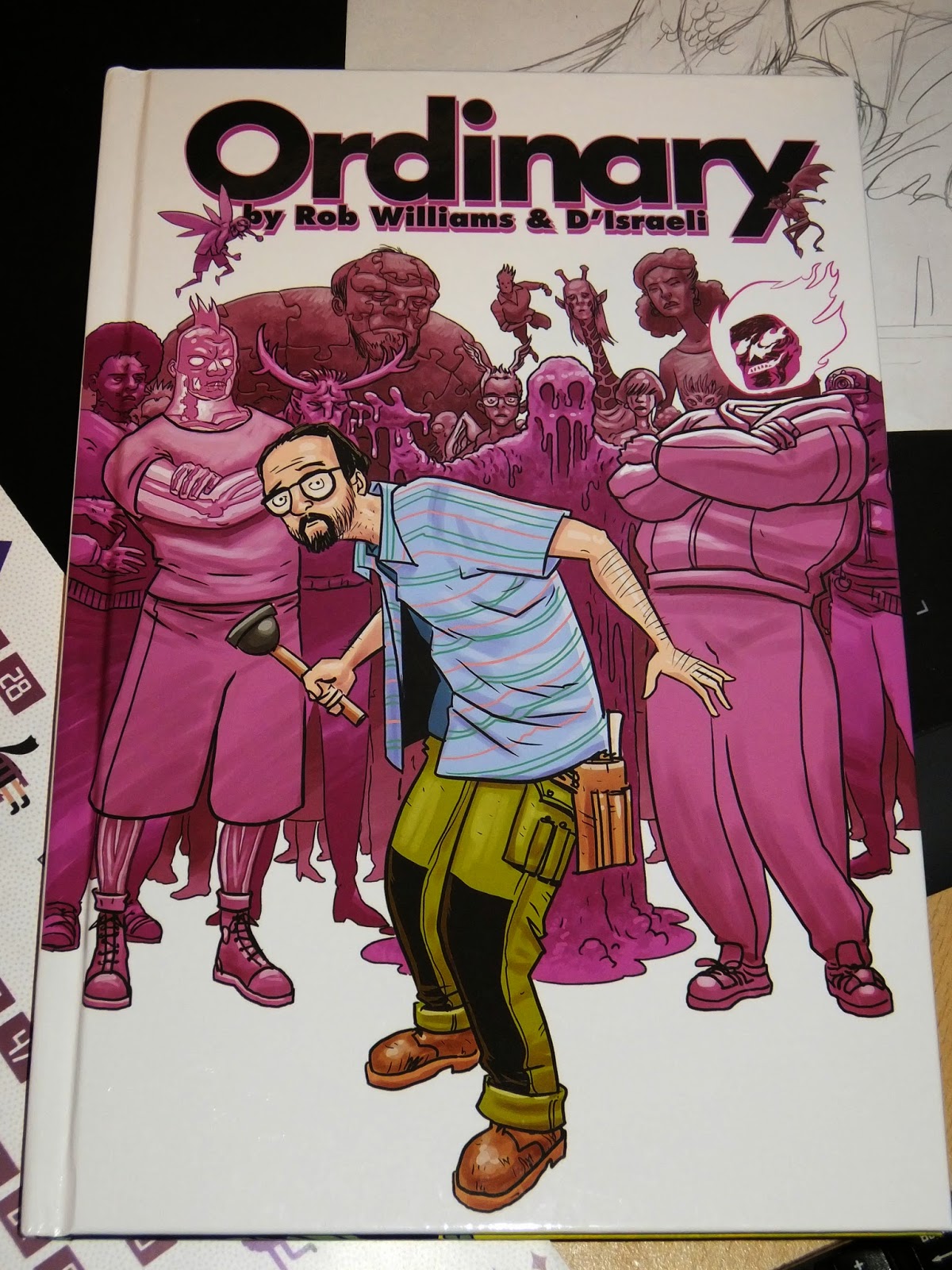 It was grand to sit with Matt enjoying a pizza and a catch-up. It really has been a while.

But all things come to an end and I say my farewells to Matt...until next time that is. 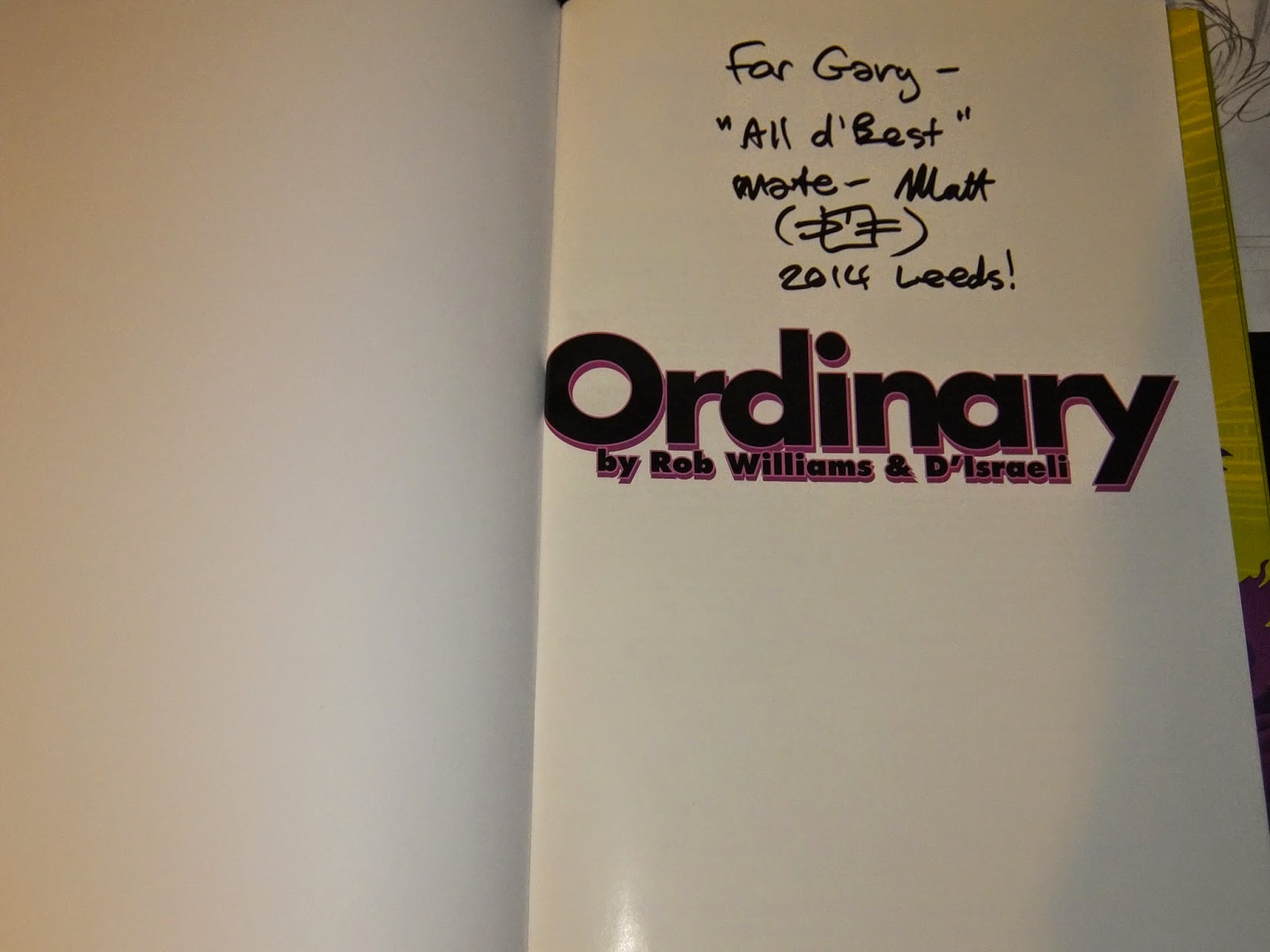 We were all feeling pretty pleased with ourselves traveling home. A final tally of sales had been done and not surprisingly this was the best Thought Bubble ever, and the WESTERNoir books accounted for just over 40% of the total sales so I'm well chuffed.

It had been a cracking convention and according to Dave and Colin an amazing end to a great year...Year on year sales had doubled in fact!

So no arguments from me then.

There are plans afoot to release more books including three WESTERNoir titles, so I got high hopes it'll be even bigger and better next year for Accent UK.
Dave's already got his targets set for next year and is looking forward to it.

Me...
I'm desperate to finish WESTERNoir Book 5 (or the beginning of Season 2 as I like to call it) so it's ready for the first convention that Accent UK plan to attend in 2015.

It's that time again...
Off to Leeds (Northish England don'tcha know)for the annual"Thought Bubble" get together.
Loads of fine folk will be there, friends and fellow comic creators...including a fair few
professional guests.
Ya'll kin find them here.
http://thoughtbubblefestival.com/
I'll be at the AccentUK table (Table 46 in New Dock Hall ) where yer kin find two new books on sale. 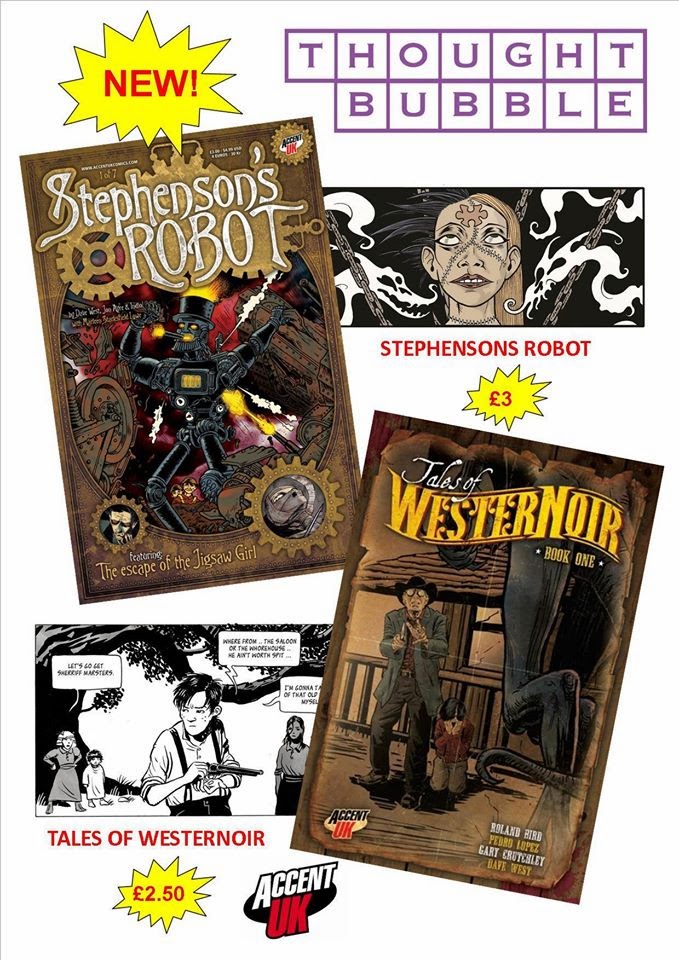 And sketches a plenty fer those that buy alla the first four books of WESTERNoir.
Pop along and say howdy...


Posted by Gary Crutchley at 09:48 No comments:

I finished the cover to Book 5 awhile ago (still working on the pages, but a fair few pages are now complete at least...soon, oh patient ones, soon). But didn't post it for one reason or another, so I'm gonna rectify that right now...
And here it is. 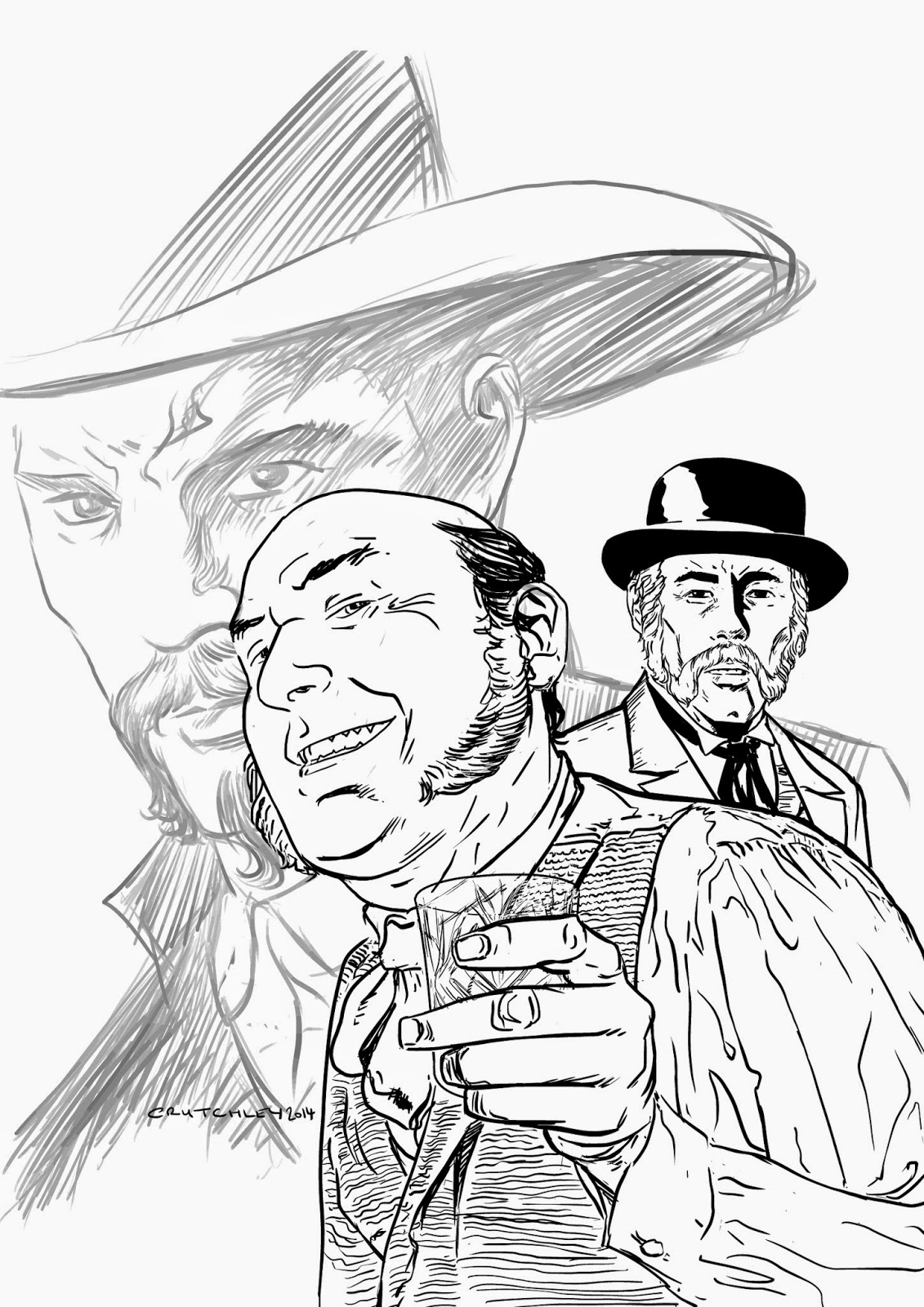 I liked the composition to this even though not much is going on.
So I sent it to Matt Soffe (and his website is here http://mygrimmbrother.blogspot.co.uk/. Mosey on over, so you can see all manner of awesome art that he does) to colour it and oh my when I saw just what he did with
my image I was blown away...
It's fabulous and here it is in all it's glory. 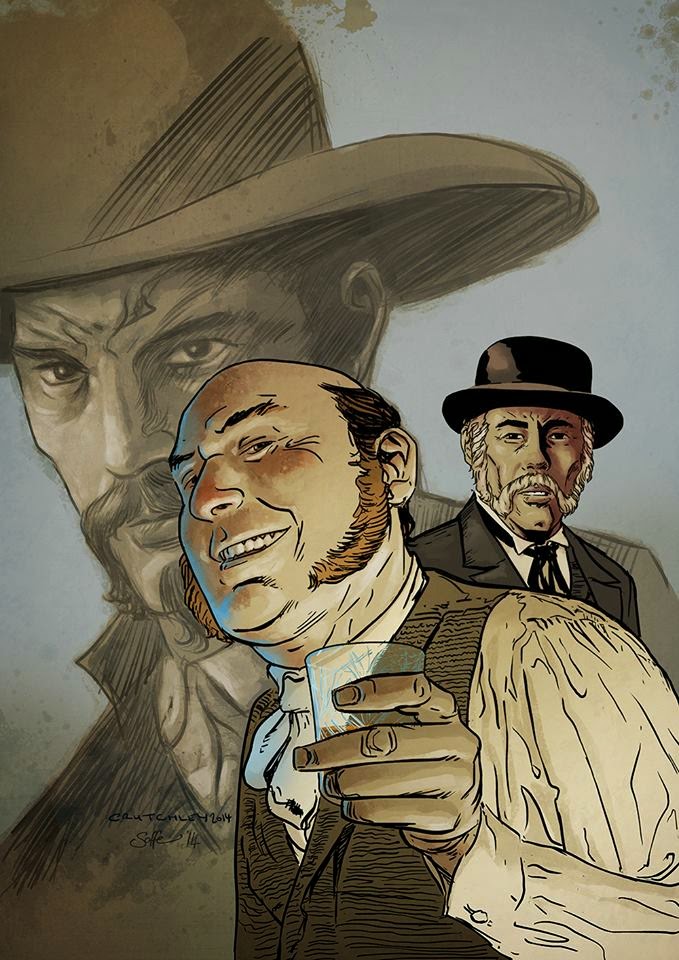 It's my favourite cover so far and I can't wait to see this on AccentUK's table.

http://momentofadventure.blogspot.co.uk/.
Seems like they had a crackin' time and sold a heap a books...
Which is great news.
Posted by Gary Crutchley at 06:31 No comments:

More reviews of Josiah and Co.

Ya'll kin find a review of WESTERNoir books 1-3  here.
Have a looksee seems like they a likin' what they is a readin'.
http://travellingman.wordpress.com/2014/10/31/review-western-noir-books-1-3/
Posted by Gary Crutchley at 06:21 No comments: