Wishing you all a very Merry christmas and a stonkin' new year.
Posted by Gary Crutchley at 10:36 2 comments: 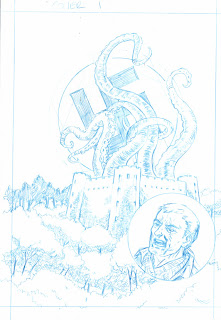 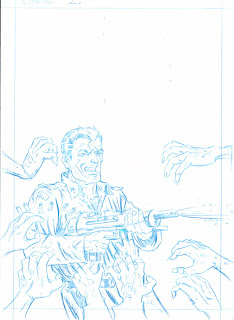 As well as working on 6 Months (see last post) I'm also working on a short story called Hell's Nazis.
Written by that talented scribe, John Halfpenny, and we're hopeful that it will be printed late next year.
It's a 10 page all action two fisted tale of a group of special commandos fighting against Adolf Hilter's greatest threat...
that's right Zombies.
It's also a tip of the hat towards all those great british war comics that used to be printed every week in Britain, like Warlord and Battle.
John and I are very proud of this strip and we've decided to do something a bit special with it hence the 2 (yes 2) covers seen above,
They are all finished, inked lettered with the logo and everything but I don't think I'm gonna show them just yet, so you'll have to make do with the pencils.
So enjoy and I'll be posting more soon.
Posted by Gary Crutchley at 03:18 4 comments:

Hurrah!!
I finally finished all the inking and lettering of the first issue of 6 Months.
Took me a bit longer than I thought, but that was probably because I kept going back and tweeking it here and there.
Big mistake.
I'm happy with the result, and tried to be as conservative with the use of greys as I could.
I think it all works rather well even if I do say so meself.
If Insomnia publications do with this like they done with their other books, then a goodly sized preview of it will appear on their web site very soon.
As soon as it does I'll let you know.
Jim O'Hara, the writer is very pleased with, so I can relax a little,
but not too much, cuz I start issue 2 next week.
Oh well, can't complain.
See you next time.
Posted by Gary Crutchley at 03:27 3 comments: