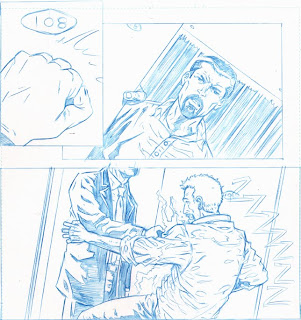 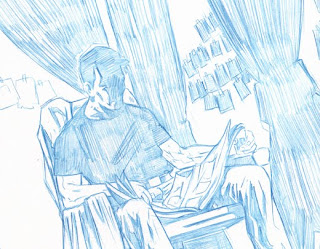 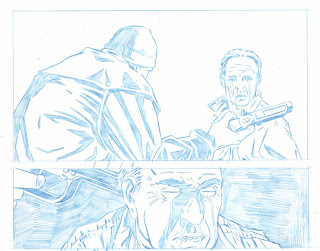 Some more scenes from 6 Months.
This is a violent issue, so trying not to show too much is a bit tricky. 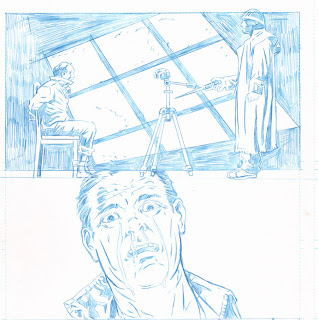 A sneak look at part of page 2 for 6 Months. It's a bit of a nasty scene so I can't show too much just yet, but there will be definitely more to come.
Posted by Gary Crutchley at 11:32 1 comment: 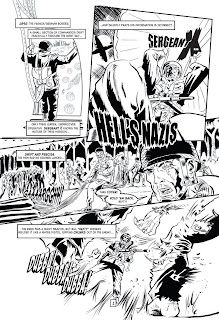 One of the most satisfying feelings in being in this business apart from seeing your work in print is when you finish a tale and it's all gone to plan (mostly)
Last week I finished Hell's Nazis, a 10 page tale of rip roaring action set in WW2 with monsters , mad scientists and zombies.
Regular readers of this blog (and I want to thank you fer coming back time and time again) will have followed the genesis of this tale from my very first mention of it.
It's written by a most talented new comer to the business-John Halfpenny (and with a name like that you just know he's born to write comics).
When he wrote it, we sat down to discuss how we would aproach it, and his vision was to do a tribute of all those wonderful Britsh weekly war comics.
So I started pencilling away just hoping to capture all those marvelous descriptions that he'd written.
I was also a bit apprehensive because I'd be inking it with a new drawing software that I'd purchased-Manga Studio. I was still trying to get me head around learning all the new features.
As well as all the other projects I was already working on, I started, and let me just say there were some days when it wasn't going that well. But finally, down to a sheer stubbornness to see this teriffic tale finished, I completed the final page last week.
I sent it John straight away, with fingers crossed, to see what he thought and to edit all my typos and spelling mistakes.
Thankfully he loved it which was a great relief.
Unfortunately, although it's got ahome to go too, it won't be published until next year which is quite a while and that's why I've posted the completed second page to whet all your appetites.
This is the second project with John and there is a third planned which I'm looking forward too.
Anyway enjoy the page and I'll let you know where and when it'll finally see the light of day.
On another note Carter's Column, the weekly comic strip published on the Birmingham Mail's webpage is at chapter 11 this week...11 weeks already...bloody hell that's gone quick.
There are a couple of changes with the art. The magnificent Mats Engesten inks over my pencilling from this week, so he can't do the colouring, so lets welcome aboard Andrew Dodd who carries on where Mats left over and a terrific job he's done. But don't take my word fer it, go on mosey over to the wbsite and check it out fer yourselves.
And that's it fer now...Almost finished part 1 of another short tale( more on that later) and 6 Months is thundering along. Issue 2 is almost pencilled.
Posted by Gary Crutchley at 07:46 3 comments: