Dave Stevens, owner  of Geekbox of Newcastle-U-Lyme has set up a display of all things AccentUK.
Ain't it a peach. 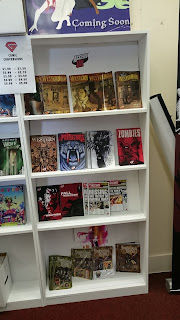 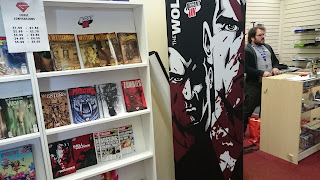 Who doesn't love a bit of Zombie art 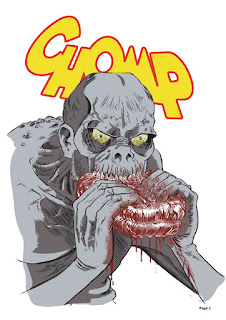 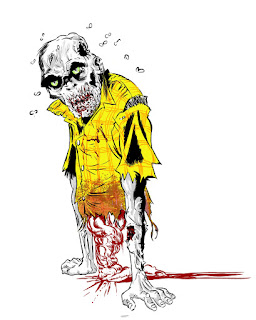 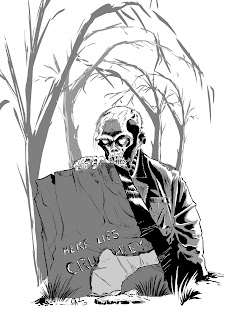 A couple of pages from different strips I've done over the years.

I did this for the Horror web site "Split Lip" written by Sam Costello.
There will be some news about this shortly.

This was written by John halfpenny for Accent's Uk Zombie2 book which has now sold out. So if'n ya wanna read this I'm afraid it's a trip to ebay...
Unless...hmmm what am I teasing at.

Both were extremely fun to do.
Posted by Gary Crutchley at 08:39 1 comment:

AccentUK are off on their wanderings this Saturday..
This time to Bolton at the Macron Stadium.
See here  for details

It's just Dave West and Colin Mathieson this time as
I've been chained once again to the drawing board...
Seems like Demoncon was this month's treat.

Oh well Book 7 don't git done by its self now do it?

If you do attend, ask Colin (he's the smaller of the two and
Scottish) just how long have we got to wait for his Zulu book...

Ain't normally so pleasant when I have ta git outta bed at quarter to five in a morning...
An' especially not Sunday Morning.
But last Sunday I hadda do just that and I had me a smile on me face ta boot.
'Cause last Sunday Dave (that would be West to you folk) and I traveled the lonnng trip southwards
towards Maidstone.
Cause that's where Demoncon X1 was takin' place and AccentUk had itself a table there. 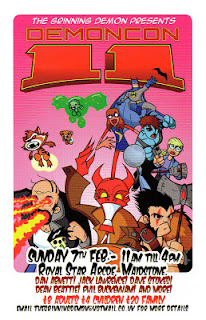 This is the third year Dave and I have made our way to this annual event and both the previous ones were thoroughly enjoyable...so we were  expectin' good times this time..
There's usually two of these events a year organised by Graham Beadle, proprietor of Maidstone's premier Comic establishment- "The Grinning Demon" but we only attend this one...
It sorta kicks off the convention trail for AccentUK.
Dave and I decided to head down south earlier than other years (hence the early morning) so we could set up early and get ourselves a good look around...
We normally just manage to arrive as it opens...
So we did and arrived with time to spare...even finding a car park that backs on the back of the Royal Star Arcade ( this is where the con is held)...So a bonus...
We were well ready for 11 O'clock when the doors opened... 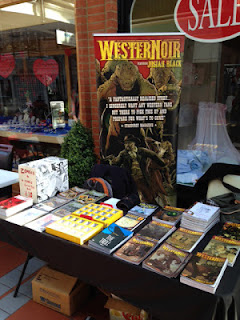 And once them doors opened I don't think we stopped much at all...
New customers...
Returning customers.
Folk talking about Dave's bespoke Lego pieces...
(see Dave's blog fer details here )
All in all a rather splendid day with cracking sales...
Always good to see satified readers coming back for more and that they did...
and then some.
There may be bigger cons out there but none so friendly and welcoming with loads of heart.
Gotta thank Graham and his team for all the hard work in making Demoncon such a
success.
Ya'll can see  here
all the photos of the day folk have posted.
We already booked fer next year, we that keen to return.

Posted by Gary Crutchley at 08:55 No comments:

Dave (that would be Mr West) and I are off to Maidstone on Sunday to attend Demoncon X1.
It's organised by Graham Beadle who owns Maidstones finest Comic emporium "The Grinning Demon".
It'll be the third year Dave and I have attended, become an Accent UK tradition really to start off the year of Conventions.

We'll be launching "Tales of WESTERNoir"2 on the day and it'll be the second con where we'll be selling WESTERNoir Book 6. 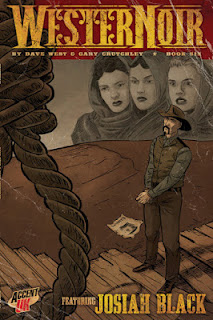 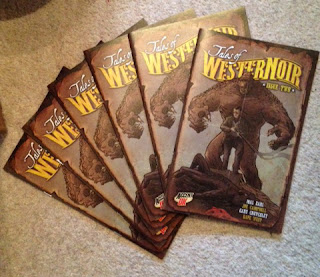 Posted by Gary Crutchley at 02:18 No comments: